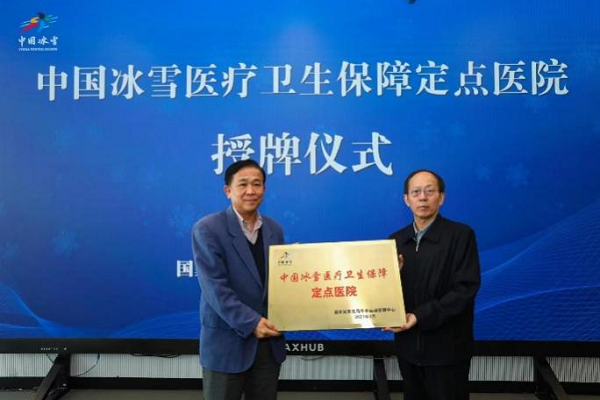 On 15 April 2021, the award ceremony of the "Designated Hospitals for Ice-Snow Medical and Health Insurance of China" was held at the Winter Sports Center of the State General Administration of Sports. A total of 11 hospitals were awarded the "Chinese Designated Hospitals for Ice-Snow Medical and Health Insurance", with Peking University School of Stomatology (PKU-SS) representing the only dental specialty hospital selected, due to its reputation in oral healthcare. This award further highlights the contribution of PKU-SS in sports medicine in China, having being awarded the "Designated Hospital for Olympic and Paralympic Winter Games, Beijing 2022".

As the National Center of Stomatology, PKU-SS plays a leading role in providing high-quality and efficient oral healthcare in China. PKU-SS adheres to the concept of placing patient health as the top priority. Based on its superior dental services and management practices, the PKU-SS was also ranked first in the "National Examination" for first-class hospitals. As one of the designated hospitals for the Olympic and Paralympic Winter Games, Beijing 2022, the PKU-SS is currently undergoing intense preparations for all pre-matches. A special medical team has been established and sent to Chongli to form part of an expert medical service team comprising 12 doctors from other designated hospitals. The relevant medical and research teams of the PKU-SS have made great progress in studies of frostbite and general maxillofacial trauma prevention during the Olympic and Paralympic Winter Games, based on the accumulation of valuable expertise. A set of prevention and treatment systems for frostbite and maxillofacial trauma has also been established, integrating comprehensive prevention, mobile diagnosis and treatment platforms, diagnosis and treatment processes, and personnel team construction. The standardized and integrated emergency medical support capability of the PKU-SS laid the foundation for the construction of a new mode of emergency medical support, ensuring efficient and reliable technical support for the Olympic and Paralympic Winter Games, Beijing 2022. The PKU-SS has also formulated relevant systems, including treatment procedures aimed at providing high-quality and convenient dental medical services for the competing winter athletes, helping ensure the success of the Olympic and Paralympic Winter Games, Beijing 2022.

last text: The PKU-SS — The Only Specialized Hospital Shortlisted for the Top 10 China Hospital Knowl…